Stuffing a turbo LS into a first-generation Commodore is a bloody good way to build a seven-second street car, as we’ve seen lately with cars like Adam Rogash’s VK, ALLSHOW. Darren Clinton’s immaculate VH SS looks to subscribe to this newsletter by combining a killer stance on fat rubber, with that immaculate HDT-inspired bodywork, and a 1200rwhp twin-turbo LS. But Darren didn’t quite mean to end up with a killer eight-second streeter.

“I bought the VH as my first steel bumper car once I could finally afford a toy,” says Darren. “It was a roller with a 383ci Holden stroker, a T5 manual ‘box in pieces, a 9in diff, and the interior either missing or so old the material on the seats was decayed and coming apart. It is a genuine 308 VH SS so I had decided I was going to do a quick closed-door respray and put it together as it was… until we inspected the paint more closely and I saw the ripples in the sun. I then decided it was time for a full panel and paint job, and the build began to spiral from there.”

After stripping the car to its undies Darren had Mirror Image Panel and Paint repaired, primed and painted the mid-sized four-door in a custom pearlescent version of the famous original HDT hue, Maranello Red. Steve Green from Vintage Commodores worked with Tim Rayment to rebuild the interior, making it fresher than Don Johnson’s haircut in Miami Vice. But then Darren changed the goalposts from tidy plastic-powered streeter to something far crazier.

“I decided to go for a big horsepower combo as I wanted to try and run a seven-second time in a registered street car,” says Darren. “I sent the VH to Jeff Johnson at Streetbuilt Racing and we came up with a combo to suit, then Lundy Race Fabrication went to work to make it all fit.” 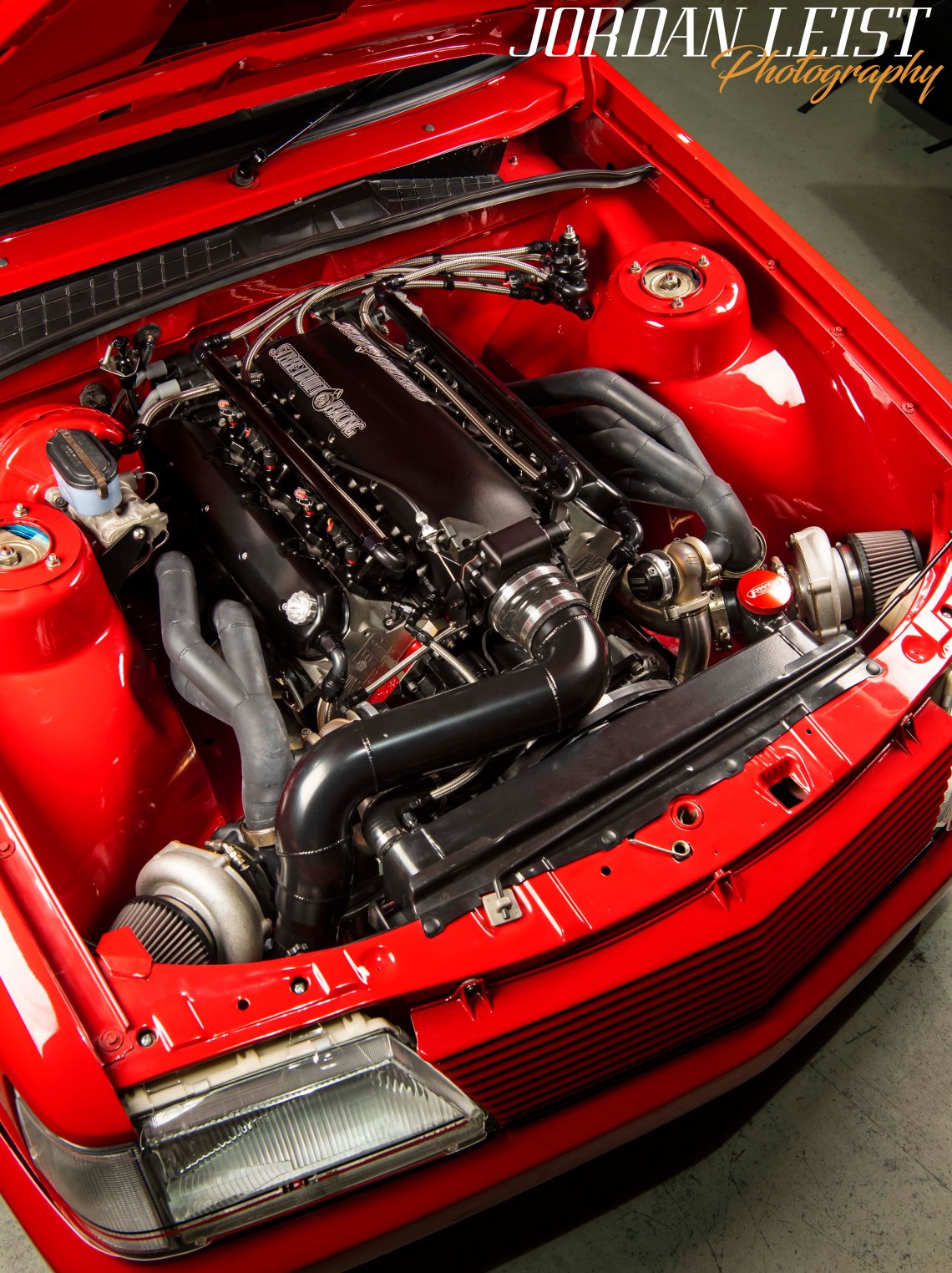 Siemens 2400cc injectors hose the E85 into the LS from a custom fuel cell made by Lundy Race Fab, housing an Aftermarket Industries in-tank pump hanger housing a trio of Walbro 460L per-hour pumps. A Holley HP EFI engine management system controls the vitals, and is currently set to 26psi boost from the twin front-mount turbos.

The Gen 2 Precision 64/66 snails sit on custom Lundy Race Fab exhaust manifolds, with more Lundy Race Fab custom pipework joining the Plazmaman Pro-Series intercooler, as well as the full twin three-inch exhaust that drops into a single four-inch tailpipe. All up the combo makes 1244hp at 7000rpm, measured at the hubs on 26psi and E85 boost juice. “Once the dummy build was complete we realised some rear suspension upgrades and a roll cage were now required to handle the projected horsepower,” says Darren, who then shipped the car to Adam Spiteri at Cronic Customs.

The VH scored a custom four-link rear-end, with the rails notched to fit the larger wheel tubs to swallow the 15x10in rear wheels. Cronic Customs also added a custom anti-roll bar, six-point roll cage, and a parachute mount, plus fixed race seats as per the ANDRA regulations.

A Race Products sheet-metal 9in was filled with a Strange Engineering TruTrac centre, 3.25 gears and 35-spline billet axles, then hung off AFCO dual-adjustable coil-over struts. It works with the Reid-case ‘Glide, TCE 10.25″ converter, and Final Drive two-piece tailshaft to carry the power from the LS up front. While he had a stout driveline, the car wasn’t complete yet. Nothing motivates a project towards completion like setting yourself a deadline, and so Darren decided to show the SS off at West Australia’s biggest show, Motorvation, just two months away.

“I was chatting with Mark “Happy” Williams and he suggested finishing the VH for Motorvation, two months away,” explains Darren. “I thought maybe it could be done, so I sounded out a few friends and they pushed me to have a go. It turns out it is possible with a lot of coordination and running around!

“We went on the mad rush to build it, including countless hours from Mirror Image Panel and Paint as the car was painted again, Cronic Customs, Street Built Racing, Audio Image for a full re-wire, Vintage Commodores, Lundy Race Fabrication and Tim Rayment my trimmer.

“The VH was finished on the day of Motorvation with it on the hub dyno at 2:30pm, then set-up at about 4:30pm. It was an amazing effort by all involved and the VH turned out exactly how I dreamt it would.” After wowing everyone on debut Darren took SS out to the track, to head towards nailing his goal of a seven-second slip. “It has run a PB of 8.30@169mph so far,” he says. “We encountered wheel standing issues so we couldn’t dial anymore into it, but new Pro9 struts are ordered and the aim is to get the 7-second ET. Not bad for a full-trim street car with an exhaust!”

The story first appeared on the Street Machine LSX Annual, 2019