They say that good things come to those who wait. Well, Brad Fletcher had to wait a while to get his coupe, but it really wasn’t that good to start with: “It took me longer to find the car than it did to build it, XA coupes are just hard to come by. Every year maybe a dozen would come up for sale, but it would be 10 XBs and two XAs – and I wanted to start afresh, I didn’t want to buy something that was already built.”

The car showed up on Gumtree, so Brad went and had a look: “It was your typical rusty coupe. It had been stripped for 14 or 15 years and had just sat in the shed. He wanted $14,500 for it at the time, and it was just too much, so I walked away.” About six months later the car turned up on eBay and Brad was the highest bidder at $8500 but that didn’t meet the reserve. “He was adamant he wanted $10,000, so I let it go. Two months later he contacted me to see if the $8500 was still on the table and here the fat bum is four and a half years later.”

What Brad started off with wasn’t too flash, and there wasn’t an engine or trans, but he did get quite a few spare parts with it, so it turned out to be a pretty good deal. The next step was to find a panel beater that could sort out the rust and get the car back to better than new. No prizes for guessing that this didn’t go as smoothly as it could have, but Brad admits he got off pretty lightly: “I waited eight months for one guy who would tell me all the show cars he had done – showed me few photos but I couldn’t visit any owners. I should have known then to walk away, but my heart overrode my brain. When he finally started he butchered the left rear guard when rolling the lip. This guard was rust free, which was unbelievable considering the rest of the car.”

On day three of having the car, the panel beater butchered the boot rubber channel, so it was at this point that Brad took the car home: “I was lucky it only cost me time more than dollars. I got off lightly compared to some horror stories I’ve heard.” Brad didn’t sit around feeling sorry for himself; instead he got busy: “I did a lot of work myself on the body. I replaced the floors myself, everything that people wouldn’t see, basically.”

“In the panel beating industry, you get a lot of people that over-promise and under-deliver. Rob from Perth Panel & Paint contacted me – after the first disastrous panel beater effort –through the Coupe Club. He gave me a price, the number was where I wanted it to be, and he did it on time and on budget. I classify him as a mate nowadays,” says Brad.

Brad decided on a full RRS suspension under the car, straying away from the more often seen dragstrip inspired set up to something a bit more useable and comfortable on long drives: “I wanted a bit of both. I knew the dragstrip was going to be something I wanted to do, but it wasn’t going to be every weekend, maybe once or twice a year.”

One significant advantage that the RRS suspension gives you, aside from better handling, is the fact that you can make a lot more space for headers when you remove a large portion of the shock towers. That space comes in extra handy when you’re planning on stuffing a big-block in the car, and not just any big-block: “I wanted to go a big, big, big-block. It’s an A460 block, which is the Ford Racing block. It has 4-bolt mains, siamesed bores, priority oiling and all the good bits and pieces.”

When Brad mentioned he wanted a big, big, big-block, he wasn’t joking around. How do 600 cubes sound? With the factory block you can “only” take them out to around 550 cubes, hence the need for the A460 block. It’s one of Kaase Racing Engines’ P-51 combinations that has had a bit of a freshen up courtesy of Ierace Automotive. “I bought it brand new but when I first fired it up the rear main started weeping. I put up with it for a while, but when I decided to sort it out, I thought we’d lean on it a bit. It came with a hydraulic roller, so we went to a solid roller and make it a little bit nastier,” says Brad.

When it comes to the body, the Fordophiles out there will pick the GT front guards and bonnet, but Brad’s not trying to pull the wool over anyone’s eyes. The car still wears its Fairmont badge proudly on the rear panel. That scoop might also look familiar, it’s actually a ’69 Mustang scoop, although Brad did have to make it slightly taller to clear the QuickFuel 1150cfm Dominator carb. “It matches up really well because down the middle of the bonnet on the XA it has a ridge and the Mustang scoop has the exact same ridge,” says Brad.

These days a lot of people are getting a bit scared to modify the classic Aussie muscle cars that have been the core material for the street machining scene, but that wasn’t the case for Brad: “I wanted a no rules car. I’ve got a really, really nice K-code XY Fairmont as well that I’ve had for 17 years, and it’s a beautiful car, but I’m just a caretaker maintaining it, and it frustrated me a little bit, so that’s why I wanted a car that I could do whatever I wanted to it – no rules.” 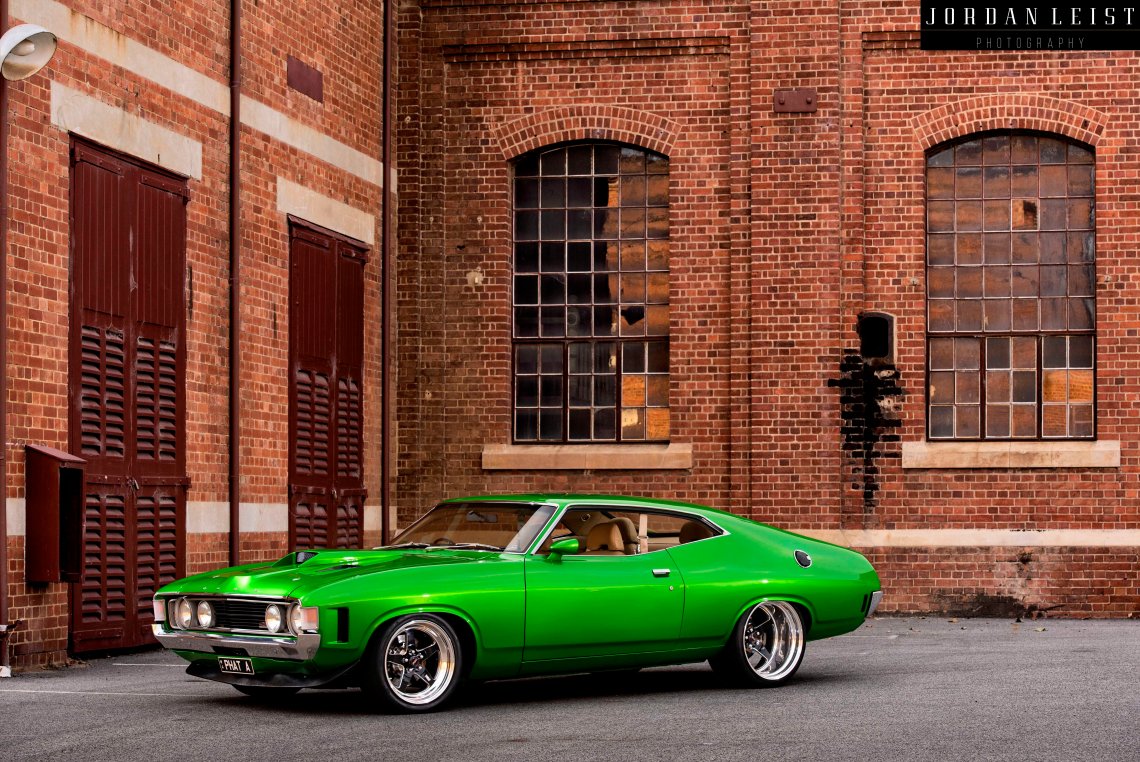