I’ve had a day to sit back and reflect on all of this and to be honest, it doesn’t feel any better.

The plan was to photograph Todd Mckay and his car, alongside all of his mates, one more time. Sadly, we missed it, and I am gutted. Each time we came up with a plan, something else was happening, and recently, the last time I checked in with Todd’s best mate, James England, aka Proshine, he was back in the hospital.

James was optimistic and so was I though. Todd had gone through so many challenges and rough patches, this was just going to be another one of those we thought. I started listing locations and ideas to make it easy for Todd to travel and I was ready to go as soon as everyone else was.

It hurts me to say it, but 29-year old, Todd, lost his 7 year battle with Hodgkin’s Lymphoma last Friday, the 10th of May. I found out yesterday. It hit me like a tonne of bricks.

He put up an amazing fight, year after year, while somehow maintaining a positive outlook on life. The strength and resilience he showed through his battle will always be remembered. He did better than I could, I know that.

His amazing wife Shea was there through his struggle, day after day and she never gave up, nor let Todd give up either. As a woman and a partner, you couldn’t ask for more. Her love and dedication was something unique and incredibly special. I feel for her, so, so much.

The fact that Todd was only 29 makes all of this even worse to think about. His 20’s were stolen from him, as was the rest of his life ultimately. He missed out on so much, but I have to tell you, he jammed a hell of a lot into it though. Towards the end, he travelled away with Shae, celebrated with friends and family and did his very best to remain in good spirits. I just wish we got to get that shoot done. I sit here knowing that it would have been something special to share.

Since these photos were taken, way back in 2013, the car had undergone several changes, all with the aid and dedication of his mates. If my memory serves me correct, the car ended up with a new motor, a shaved engine bay, airbags, new wheels and a tonne of other stuff too. Todd didn’t get to use the car much himself, but his mates would take him out in the car and get him involved.

We did these photos after Todd came out of the hospital one time and it was a surprise to help lift his spirits. I remember the day fondly, and I remember several occasions where Todd gave as good as he got in the piss-taking taking stakes – nothing was off limits.

The way I want to remember Todd is with that huge smile of his, the cheesiest of grins and a heart that practically glowed. He loved his wife, loved his mates and loved his car. He was there to have a laugh, lend a hand and to be involved in everything. The guy was as genuine and as kind as they come.

From the bottom of my heart, the most sincerest condolences go to Shea, his family and all of his closest mates. His memory will live on forever.

I love you mate.


Here is the article that appeared in the first issue of my old Magazine, Forged. Todd had no idea that the car was going to appear in there. His smile made it the most enjoyable part of that issue.

The first thing that strikes you about Todd McKay is that he is mighty proud of his 2004 VZ Clubsport R8. It is bleedingly obvious because the car is always, and I mean always, immaculate – inside and out. I have never seen it look anything less than perfect. When a car is that well maintained, by a fastidious owner, you know that their vehicle plays a special part in their lives. For Todd, the car is a release, something to enjoy, something to talk about with mates and something to share with the important people around him. 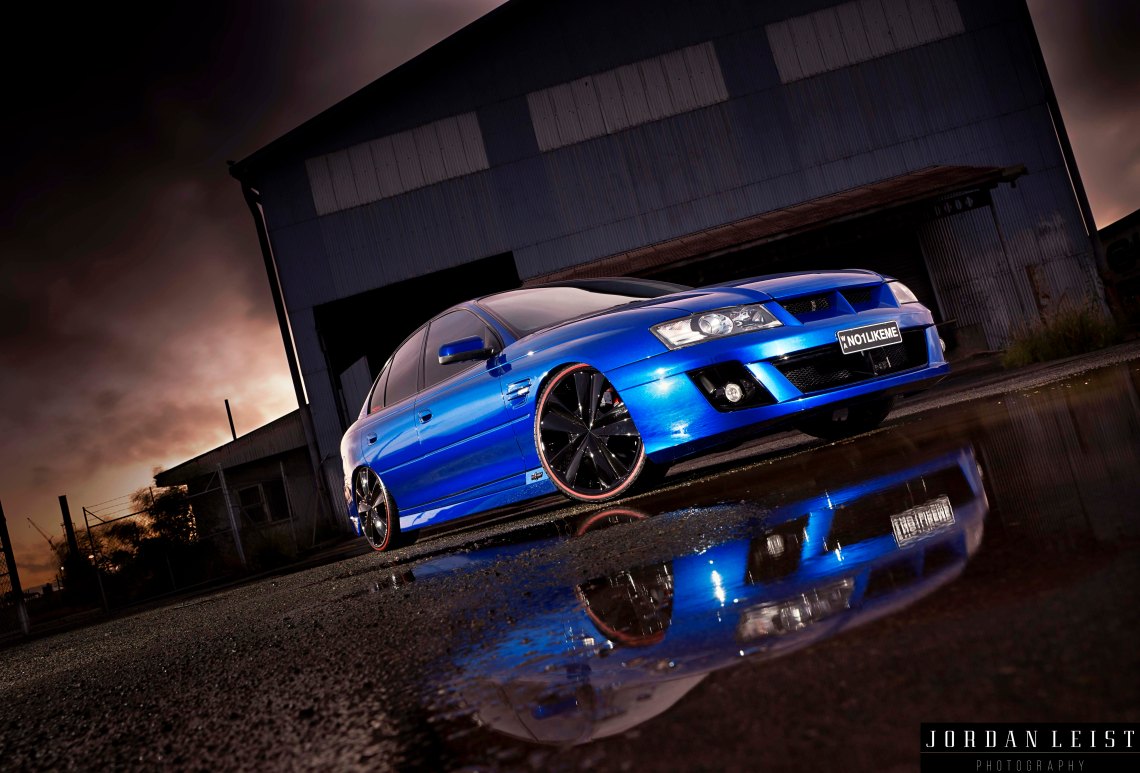 Todd is surrounded by a big bunch of mates who are all mad keen on cars, and as a close-knit bunch, they are always willing to help each other and support one another during the harder times. This photo shoot was actually a surprise for Todd and was set up by his mates some time ago after Todd came out of hospital after battling Hodgkin’s Lymphoma. Todd spent a lot of time in the hospital, and it stopped him from doing all of the things he wanted to do due to the chemotherapy. His mates and his gorgeous wife Shea have always supported his love for his car, and they understand just how much it means for him to be able to drive it and enjoy it.

Since buying the car a few years back, Todd and the boys have lowered it with BMW springs, put the 20-inch black Signature wheels shod with the ‘Proshined’ red-walled tyres on it and have painted all the interior parts, outside trims and badges in gloss black. The body also wears a Senator rear wing and GTS rear window spoiler. The colour coded engine bay is home to a cammed LS motor fitted with an OTR cold air intake and a twin 2 ½-inch stainless exhaust. A B&M Pro Ratchet shifter controls the 3,500 rpm high-stall equipped box, and Todd had a Harrop TruTrac diff with 4:11 gears installed. At one point in time, the box let go in a big way, so all of Todd’s mates all chipped in and bought him a new one to get him back on the road. Good blokes those guys.

Whenever there is a cruise on or an event like Motorvation, Todd is the first guy getting his car ready and extra clean. He loves getting out there with his mates and enjoying everything as a group. He is also the type of guy to help out whenever he can.

Over the time I have known him, Todd has shown me his unique sense of humour and his genuine interest in what was going on with me and my photography work. We have often had a good laugh at the expense of his mates and even each other. He has nothing but good things to say about everyone and everyone’s cars and is one of those great guys you wish was your mate.

Unfortunately for the big guy, as soon as things seemed to be back on track for him and Shea, he has hit another bump in the road with his health and is looking at another battle on his hands. With such a great bunch of mates around him and a loving family supporting him I am confident that young Todd will do his very best to tackle this next challenge and be back on the roads in cruise mode with his true blue Clubby.

Cars are forever uniting people like Todd and his mates, and that is the real power of friendships and the passion shared for cars amongst people. Whatever happiness and memories Todd and the boys have gained over the years will never be erased or eclipsed – that is guaranteed. We love you mate!