It seems to be a common occurrence with the customers at Monsta Torque – once they experience their first round of modifications and get a taste of power, they want more. It is part of human nature, and well, as you know, horsepower can become very addictive.

Nikola Cvetkoski is one such individual that has seen his car reach new levels of performance each step of the way over the last few years. His journey though is a little different than most. He went to see Rob and the team at Monsta Torque after a not so successful build elsewhere. “A few years ago now, I took an N/A FG Falcon and slapped on a CAPA centrifugal supercharger with a water to air cooler. I wanted to be a little different and do something unique. It seemed like a good idea at the time, but the combination didn’t seem to work, and with the car being my daily driver, I was tired of having issues and no real performance benefits. It felt like the car saw the tow truck more than the road.” “After damaging the motor, I decided to go and see Rob to get his opinion on what was wrong. He sorted the issues out for less than a quarter of the price I was quoted elsewhere and, he gave me some valuable advice – buy another car and start again. It wasn’t what I wanted to hear, but it made sense to me, and it was going to save me a tonne of heartache and dollars at the end of the day. I respected Rob’s honesty, and I valued his opinion” explained Nik.

Nik purchased another FG, this time, an ex-cop car with a few kilometres under its belt. It was a great base to start with though, and after his last debacle, Nik didn’t hesitate to head back to Monsta Torque to begin his new journey off on the right foot. “I started with the basics – a Stage II Monsta Torque Package with a 4-inch exhaust and a matching Stage II Monsta Torque ZF ‘box. The car was my daily car for a good four years. 450hp soon became the norm though, and it just wasn’t enough anymore, I needed some more punch. I decided to step it up by swapping my stock turbo for a GT3582 which was high flowed to 67mm and then I upgraded the fuel system to suit with a surge tank and twin Bosch 044 pumps. The oil pump gears were replaced and new head studs fitted too. On 85 and with an external gate, the car ended up making 750rwhp with a huge amount of torque to boot. That was the change I was looking for!”

With that combo, Nik decided to try his hand on the quarter-mile. “I knew that without a cage, I only had one real shot at running a nine, so Rob told me to get a pair of Hoosiers for the rear and work on getting my 60ft times down to 1.4-1.5 seconds before really giving it to her.” On his first full pass, Nik nailed a 9.78 @ 144mph. “To run a nine with a donk that already had 220,000kms on it is pretty impressive,” laughed Nik.

You would think with a nine under his belt and lots of street cred, that would be enough for Nik, well, you would be wrong. After his trip down to Racewars last year, this horsepower junky needed a bigger fix.

“After seeing Rob’s car and Joshs Purple F6 hurtle down the runway, I knew that the 1,000m Vmax runs were my next challenge. I wanted to smash the 300km/mark and be up there with the rest of the Monsta Torque boys.”

There was only one thing to do – go for it all! A Stage III Monsta Torque motor was the starting point and strapped to the side of the fresh-as Barra, is a polished Precision 7675 turbocharger on a ceramic-coated, custom made CRG manifold. Polished piping meets a Processwest Stage III intercooler and a 60mm external screamer pipe vents the waste.

The fuel system copped a full overhaul too – 2200cc injectors are slotted into the Plazmaman intake plenum, and a triple pump, AI Surge tank with 3 Walbro 525 pumps,(and a 460 in the tank) shoots the E85 towards the custom braided lines at the pointy end. The engine bay looks pretty damn impressive. With all of that bling under the hood, Nik decided to give the outside of the car a freshen up too – some blue pearl was mixed into a fresh coat of Ford white. It doesn’t look like an old cop car so much anymore. 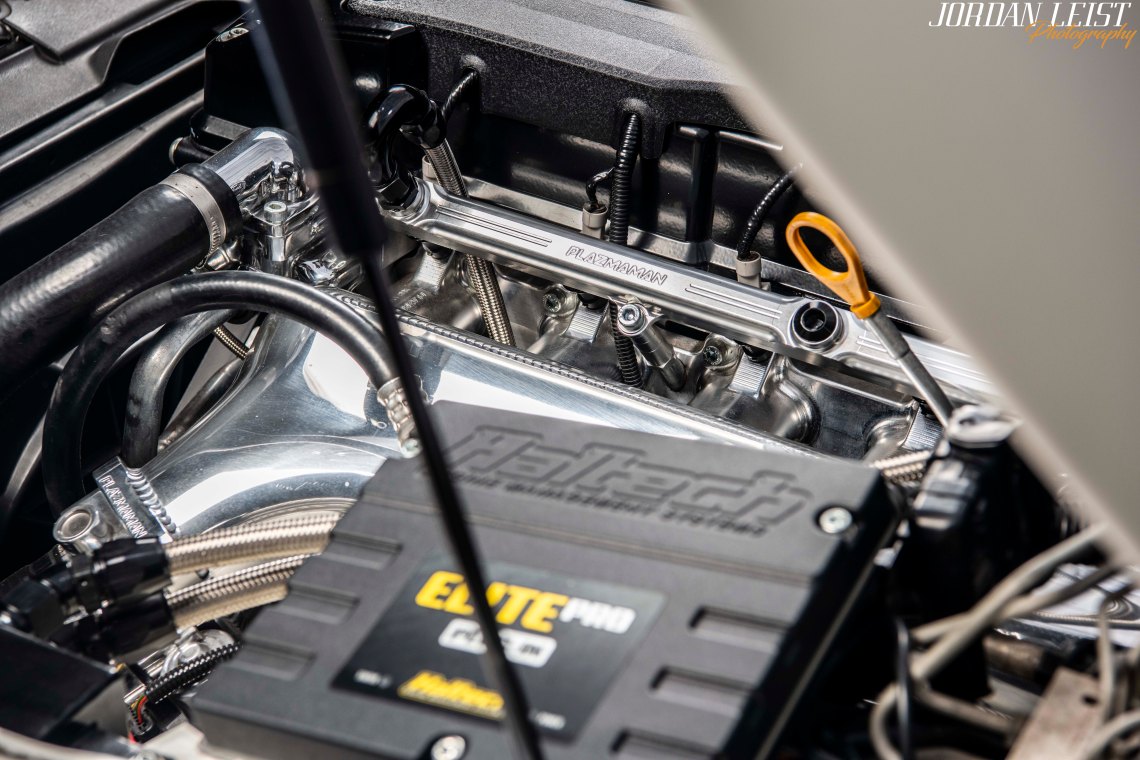 Three days before Racewars, Rob decided to make a last-minute change with the ECU. He installed a brand new Haltech Elite Pro Plug-in. The Elite P’N’P has the ability to collect a complex data log from the engine and transmission, which assists with the tuning. The ECU gives more control with torque management, fuel control and ignition control, as well as offering engine protection too. Two of the other Monsta Torque cars were fitted with the same system for the event too. It is now the go-to ECU for the team.

After a couple runs in 35-degree, the car rolled off the dyno after making 1,009rwhp at 32psi. “There is plenty more left in the motor, but I am nearly maxing out my rear housing, given its only a 1.15. We made the 1,000hp mark, so that’s all that matters,” said Nik. “I am stoked with the car; the only downfall was the cancellation of the Racewars event. The best I achieved on the Saturday was 279.6km/h over the 800m, and that was only using the 850hp tune. I still had two more tunes to dial in using the Haltech rotary switch for the 1000m pass, but unfortunately, the weather didn’t hold up, and the event was washed out. Hopefully next year I can have another crack and, I might even set the car up for the quarter-mile again, it would be interesting to see the improvements there too.”

“I still use the car a few times a week; you can drive it like a regular car without drawing any attention at all, and then with a crack of the throttle, it is a whole other beast – it really is an animal. Rob and the Monsta Torque team outdid themselves; I couldn’t be prouder of what we have achieved.”