Built entirely in their back shed in Serpentine, Connor and Bailey McClure’s Barra-powered Torana has caused a stir with purists and fans alike.

The McClures are a drag racing family, with the boy’s old man Al, having raced everything from streeters to funny cars over his 30-year career in the sport. It was inevitable that the young blokes would end up hitting the 400m when they came of age. 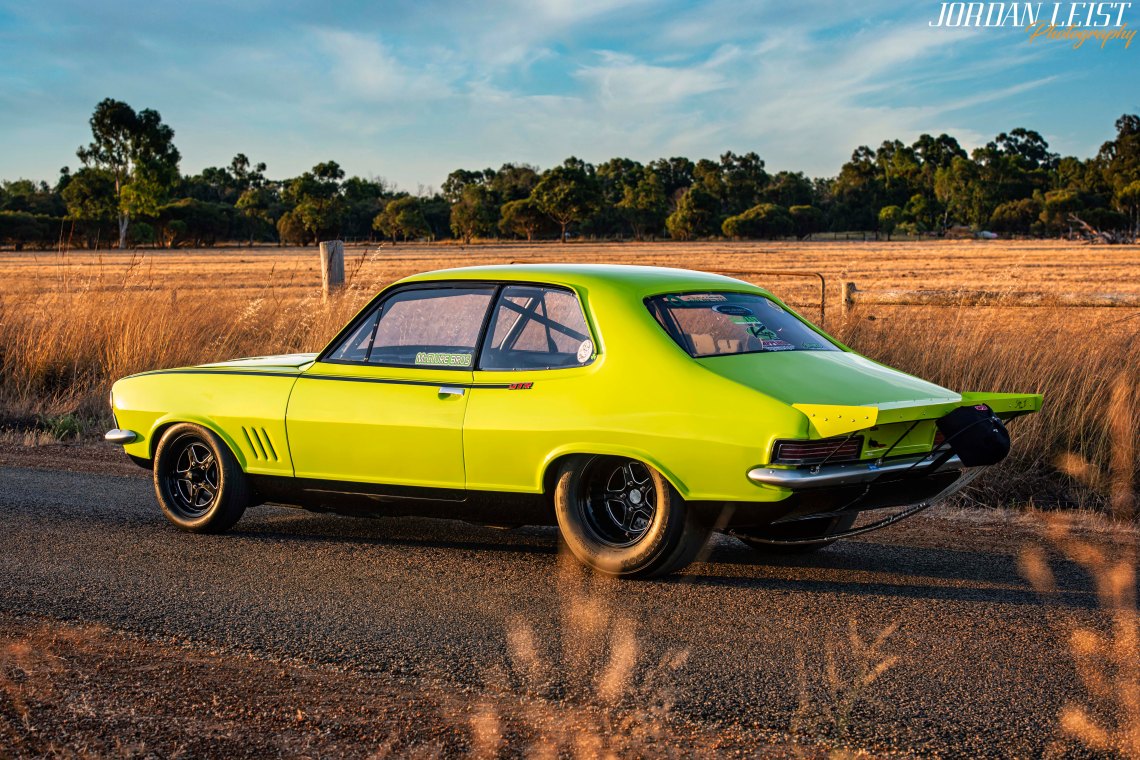 Al’s first car was a Barbados Green Torana with a 179ci six-banger and triple SU carbs, and some three decades later, he and the boys have built this LC as a tribute to his first racer, but this time around, things are a hell of a lot more serious! Ten years ago, the car was just a pile of busted metal, but Al saw the potential for something much greater, so he rescued it and left it in his backyard. Starting with such an average car, it gave the boys a chance to develop their skills in cutting things up, doing panel work, roll-cage building, constructing four-link set-ups, wheel tubbing and a heap of other tricks along the way

The car was always destined to be a six-pack, with the first options considered being a 2JZ or an RB, but the boys got real and went for the best bang for buck six in the world – the Barra!

Rob and the team at Monsta Torque provided every part of the combination, as well as faultless advice on how to set up the car. “Every part of the build was done in our shed, and Rob’s advice has been killer from day one,” said Al.

The engine was not a simple fit into the Torana though because Barra motors are tall and long, and the team also needed to make sure it was easy to work on when they were racing.

There was no conversion kit for the Torana obviously, so Al and the boys had to get their thinking caps on. “Everything had to be made by us: engine mounts, front 18-litre header tank inside the front guard, fuel pump mount, crank mandrel – the list goes on and on.” The motor was built to a plan, and stage one is in the car now. It features a stock crank, H-beam rods, forged pistons and upgraded everything. That said, it still runs a stock head with a copper head gasket, 9/16-inch head studs, stainless valves and Crow valve springs.

Once the boys get the hang of the car, the motor will go into phase two, which will see a better crank slipped into the rotating assembly, new cams and some head porting.

The engine still runs the factory turbo manifold, which is why the GTX45 (80/82) snail is lurking out of the bonnet. There is a plan to build a custom manifold, reposition the turbo to behind the headlight and get everything under the hood in the future though.

Backing the 900hp powerhouse is a two-speed Powerglide with a 5,000rpm AllFast high stall converter. A 35-spline equipped, 9-inch rests behind those massive rear treads.

It was only natural that Rob from Monsta Torque would tune the car, which is fitted with a Haltech 2500T ECU. “We went to the track with a 15psi tune and went from there,” Al said. “We busted a few bits, found some weak spots, but ran 10s, nines, a bunch of high eights and ran a best so far of 8.48@160mph on a 275 Radial Pro. We are confident of running a 7.90 with the stock cams, and when we move to the next stage of the engine build, I see no reason why we won’t end up in the 7.50s,” said Al. We can’t see how the boys go in the next season, and we have loved being involved with such an awesome project. Barra power to the front!